With a Colostomy Bag, Elvis Would Still Be Alive Today

Reading news this week I found an article about Elvis Presley’s health condition before his death. His friend and physician, Dr. George Nichopoulos, wrote a new book called “The King and Dr. Nick” and discusses Elvis’s hereditary bowel paralysis.

Elvis was always believed to die of a heart attack, likely from the buffet of drugs he was taking, but his doctor of 12 years leading up to his death now believes with new research it was actually chronic constipation that killed him in the end, brought on by bowel disease, and even his bloated appearance was because of his bowel condition. 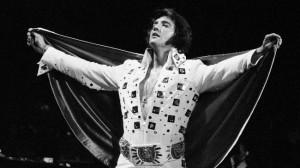 While treatment has probably changed since for Elvis’s death in the 1970’s, bowel paralysis was treated with a colostomy back then. His digestive system was a real mess, according to the autopsy when he died, and it’s unfortunate he was too proud to succumb to a pouch to live (a lot) longer than he did. Because the nature of his illness was rather embarrassing and Elvis was too proud, he didn’t get the surgery.

Even the King of Rock and Roll was not impervious to bowel disease.  It can happen to anyone, and when it does, we’re faced with the decision of surgery or illness.   So if all the secrets about Elvis are now out of the bag, and people finally agree that he is indeed dead, there is one final lesson we can learn from the King of Rock and Roll:  Never be too proud to admit when we’re sick.