The TSA has recently implemented new procedures for backscatter x-rays (like the image seen below) and “enhanced pat downs” for passengers boarding aircraft. These new procedures have caused just a bit of a tissy in the general public, and definitely so regarding Ostomy.

This method is far more intrusive than how security was previously done, especially those who are disabled and/or have a medical appliance. The UOAA has put together a fantastic update this month specific to air travel.

I recommend all Ostomates concerned with security and flying read it here.

If you would like, continue reading below; the below was written a year ago and is now more relevant than ever. 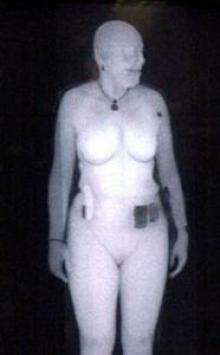 Since last weeks mishaps and security failures when a possible terrorist attempt occurred on a U.S. inbound flight to Detroit was discovered, the immediate reaction from our leadership is to create more security. But there is a balance – and the balance is with privacy and liberty. More security always means less liberty. Less liberty in this case mainly applies to less privacy, namely your own body.

The newest technology to increase security is the development of full body scanning, which allows TSA to visibly see a detailed image of your naked body under your clothing as well as anything you may have attached to your person. This would allow TSA to see anything attached to the outside of the body to TSA onlookers. This would help them spot explosives or devices that a terrorist could use to blow up an airplane.

But what about those with an ostomy? In addition to guns and bombs, full body scanners will openly display anything outside of your body to TSA security onlookers, including ostomy bags, catheters, urine leg bags, and other private medical devices.

While security and safety are concerns of flying, for many of us with health conditions it is an affront to our privacy, especially those with a medical device that we would rather not share with airport security. What if it’s mistaken for a bomb? This is not only an embarrassing mistake for TSA, it can be potentially very embarrassing for the traveler to have to reveal their medical condition to strangers. This type of experience at a public airport – being pulled aside, interrogated, and stripped to reveal your medical devices – makes the prospect of flying very unpleasant for millions of people.

There are, however, many in power that feel that this new security is an important measure to airline safety. Douglas Laird, former Security Director for Northwest Airlines shrugs off privacy concerns as he did in this interview:

I believe we have to give up some rights for the safety of everybody. It’s a real nerve that you touch when you mention that.

A real nerve indeed – in the past decade we’ve given up many rights in the name of safety. And I think it’s safe to guess he doesn’t have an ostomy bag.

Ok… so I have an Ostomy and I’m flying… what should I do? 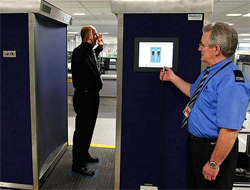 In many ways, the problems of ostomy and airports is not a new one. Many people with ostomies have already been searched, patted down, or even investigated by TSA security staff in an airport before getting on the plane. Ostomates have also had trouble bringing certain supplies like scissors in their ostomy kits onboard.

So, while this full body scanning technology is invasive for many who believe in privacy, in general for flying this will probably change little other than compromising your privacy. For many both with and without ostomy it’s an important concern. However, if you do happen to be flying, it is very likely TSA staff understands and expects to find individuals with an ostomy device attached. The best thing you can do for yourself and other ostomates in a scenario where you are confronted is cooperate & explain that you’re wearing an ostomy device.

Some tips for ostomy and airport screenings: